So, even though it was hard to leave Elkhart it was time to head to one of our favourite US cities, Washington DC to see Wanda, Charles and our DC family and friends.  Our time in DC was broken up with another mini vacation, where  we took three days and a train ride to New York City.  But, more on that later.

The first part of our DC adventure started just outside of DC when we drove from Elkhart to Frederick MD.  Our drive east was on a rainy grey day before stopping for the night in Frederick where we had a lunch date on Friday. Here we met up with Bill and Ginger (and Buddy) Bigalow who we had become friends with from St Augustine.  It was very fun meeting them as this is the first time we have met up with new friends on their “turf”.  After a nice lunch and conversation we spent  about 30 minutes walking around and what a nice downtown they have, lots of quaint shops and trendy looking little restaurants.  As we were very excited to see Wanda and Charles  we hit the road before we got to involved in shopping!  Maybe we will return there someday.

Earlier in the day Wanda had texted that Erica had an extra ticket for A Raisin in the Sun at Arena Stage that evening and wondered if June wanted to go with her.  That was a no brainer, yes!  When we arrived at Duncan Place and settled in for dinner another text came and wondered if Larry wanted the other ticket.  Another no brainer, yes!  So off we went to Arena Stage and another free night of great entertainment courtesy of  Erica and Amy via Greta.  Thanks Ladies!!

This part of our DC vacation was the short part, only two full days, but this didn’t stop us from having fun and doing a lot.  Saturday started with our ritual of Eastern Market breakfast with Charles.  After a quick walk through the market  we headed back home to get ready to drive to the east shore.  This drive took us over the Bay Bridge  to Chesapeake Bay and 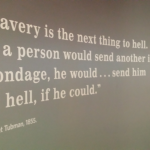 Cambridge.  Here we went into the Harriett Tubman Underground Railroad Visitor Center.   It showed us about her life and the Underground Railroad that she created in order to get her family and people she knew out of slavery and into Canada.    The center was very interesting and shows the power and determination that drives some people in the worst of times, very well done.  After the visitor centre we drove

through the Blackwater National Wildlife Preserve where we were very pleasantly  surprised with bald eagles.  Not just one in a nest in the distance, but lots of them up close and flying around.  A great way to finish off a great afternoon.  On the way back home we stopped in Annapolis, the State Capitol of Maryland as well as the home of the Navel Academy.    It is a very old town with lots of shops and restaurants.  Here we had the pleasure of another “Wanda Friendly” restaurant where we had a

great meal at Harvest Woodfire and Grill, a farm to table restaurant.  Sunday was followed up with June going off with Robin and Kim for a ladies afternoon starting with lunch, then pedicure and drinks before coming back into the city for dinner with the DC crew.    Once again a fun filled night of laughing and eating.

Now, off to New York City via Amtrak for a holiday within a holiday. 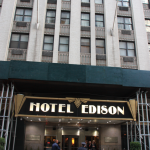 The Big Apple!  The City that Never Sleeps!  The City of Dreams!  Empire City!  The Melting Pot!  No matter what you call New York City, it is an entity upon itself.   Our hotel was Hotel Edison at 47th and Broadway at Time Square.  When looking for hotels this was the first one that I suggested to June.  She got a look on her face and said, “that is where we stayed when I was 8!”  So, 40 plus years later she was staying there again!

After arriving at our hotel which was a nice 1 km walk from Penn Station, we checked in and headed out to see what this city was about.  Now, we have been to NYC numerous times but have never stayed in the heart of it.   Times Square is known as the “The

Crossroads of the World”.  It is one of the worlds busiest tourist spots and also boasts as having the most expensive advertising spaces on the electronic boards that light up the Square 24/7.  The name comes from the NY Times building that was erected there in 1905 and was the tallest building at the time.  Now, however, it is only occupied on the first three floors and the rest of the building is just there to hold up billboards.  Oh yeah, and the most famous ball drop in the world at midnight on New Years Eve.

Our self walking tour for the night took us around and through Times  Square, up 6th Ave to Central Park, past Trump Tower on 5th Ave and through Rockefeller Centre.  The city at night is a magical place of people, lights and the hum of excitement.   We ended up  at a basement comedy club around the corner from the Stephen Colbert Show.  It was a mix of about 10 comedians, some amateurs and some professionals.  It was not what we thought we were getting when we bought the tickets, but was a good show non the less.

Now, the main reason we wanted to go to NYC was to see some of the late night talk shows that are taped in the afternoon.  However, since we planned this trip around our RV repairs, the week we are here in New York was an off week for them.  So, plan B is put into place.  B for Broadway!  Not a bad second choice and we secured tickets for Hello Dolly starring

Bette Midler and David Hyde Pierce.   There is something about seeing the old theatres from the early 1900s.  The richness and character of the Art Deco

era.   Broadway was made for the likes of Bette Midler and she did not disappoint.  Her voice and acting are very powerful and then you give her a co-star

like David Hyde Pierce and you have an amazing show.  Since our show was a matinée we went across the street from the Shubert Theatre to Sardi’s  for dinner.  Sardi’s is one of the Theatre Districts famous

restaurants and the location was too good to give up.  Since we are Manhattan drinkers what better place to have a Manhattan then in Manhattan and

Sardi’s bartenders probably made the best ones we have ever tasted!  Oh, the food was great too.   Another signature of Sardi’s are the walls are covered with famous clientele that have eaten there.  Our table we had was actually the same table that Bette Midler had ate at since her caricature was hanging on the wall above our table.  ( well, that is what we had read, so we believed it )

We were also lucky enough to get tickets for Come From Away.  A

new musical that is taking Broadway by storm.  It is being performed in the Shoenfeld Theatre.  Another one from 100 years ago which just gives you a magical feeling before the show even starts.  Come From Away did not have any “big name” headliners that are in a lot of the

other Broadway favourites. However, it sure made up for it in the music and story of Gander Newfoundland and how they welcomed the world on Sept 11th.  It was funny and sad, it was light and real.  The acting and singing was amazing,  yet the stage was very simple and versatile which gave it a very interesting feel.  It made you very proud to be a Canadian.

Not everything was done inside however.  We did a free walking tour of Time Square and Rockefeller Centre that was sponsored by our hotel.  This was interesting with facts about the way things were in the Roaring 20s, how things changed after the Stock Market Crash and

Depression and then finally cleaning up the Peep Shows and Prostitutes in the early 90s.  Now it is a very clean and a family friendly location.   We watched the full moon rise over the

New York Library from Bryant Park.  A beautiful park beside the chaos of Time Square.   Our breakfast was purchased at local deli’s and consisted of a coffee and bagel.  We got up early to see if we could get on camera during NBC’s Today Show and we stayed up late to watch the Midnight Moment in Time Square.  We bought a pretzel and sausage from street vendors.  We drank in Irish Pubs and we were even asked for directions!

It was a short stay but it was in the heart of the city and we definitely could feel the heartbeat!

We boarded the train at Penn Station in New York and headed back to Washington DC for Easter Weekend.  Another cousin, Kris, was joining us for the weekend and after everyone arrived home, we

had another full house and a wonderful Indian dinner.  Once again we are really enjoying time that we can connect with family and friends.  We also got to get our

hands a little soiled and helped Wanda get her flower bed ready out front of their house.  I spent the morning adding mulch and turning the ground over as

Wanda, June and Kris went shopping for flowers to plant.  By the end of the afternoon we had the best looking flower bed on the sidewalk!  Luckily it worked out that we could introduce Kris to our weekend tradition of breakfast at Eastern Market before she left.

Now, it was time to turn our minds to Easter prep.  Since we (Wanda and June) were in charge of dessert and June had  found online a carrot patch brownie dessert that looked really fun, this

is what the signature dish would be.  However, not

only this, but Easter eggs had to be made, trifle and Jell-O had to be prepared.  We also had to squeeze in a Critical Thinking Meeting with Charles and his Meet Up Group.  Interesting discussion on “Would you want to live  forever”?  So a busy day!

Easter Sunday was here and we packed up our food and headed to Arlington and Robin’s house for the feast.  A feast it was, roast pork, lamb and turkey for the meat, roast vegetables, sweet potatoes and homemade Mac and Cheese

for the main course then carrot patch brownies, Jell-O, trifle and Easter candy for dessert.  It is amazing on how fast five hours go by when you have good food, good wine and good conversation.  We have been lucky to be part of this tradition a few times now and are grateful to be included.

Even with this being a five day weekend it flew by in a heartbeat and it was time to say our good-byes.  With hugs given and good-byes said it was time to leave the US Capitol and head back to Elkhart to pick up Juergen from Forest River where he was fixed and waiting!