We found ourselves back in the New Hamburg/ Tavistock area for a few nights which went by quickly.  A couple nights we slept again parked at Walker Woods and then one night back  Wayne and Sharon’s farm.  We did some last minute running around, a nice cycle down to Drumbo to Green Bijou and then a little bit of maintenance work replacing the trailer plug.  After waking up and having coffee with Wayne and Sharon we headed up to Tavistock to Mom’s for lunch and to pick up our travelling mates for the next week.  Wayne and Sharon joined us, Mom, Wanda and Charles for lunch and then it was time for us to head out.

June got behind the wheel of Charle’s Civic and Wanda and Charles rode with me up to Heron Point in Stokes Bay in the middle of the Bruce Peninsula.  This is where we  started our trek to fill one of Wanda’s bucket list items, the Agawa Canyon train ride, which is best done in the fall, but that is not an option for any of us. We wanted to show them the dark skies of the Bruce Peninsula so we stayed 2 nights at Stokes Bay.  However the drive up was mostly rainy and the evening grey

so we made the best of it, talked a lot and played Phase 10 into the evening.  Since June and I were here last year we sent Wanda and Charles to Greigg’s Caves and gave them a bit of a sightseeing loop along the water.  We went for a nice cycle where we actually ran into them a couple of times.  We all ended up back at the RV in time for a barbequed sausage and salad dinner.  Then for sunset, we hopped in their car and drove up to Tobermory and China Cove to Bob and Connie Zehr’s property.  They were there with Eric and Celine and we had a nice

evening chatting down by their fire pit by the lake as the sun dropped in the sky.  It was nice, not a great sunset as the lower clouds choked it out and then the rain came but a nice evening anyway.  The next day was designed around the Chi-Cheeman ferry ride from Tobermory to South Bay Mouth on Manitoulin Island.  This was one of the highlights for Charles!  He had never been on a ferry before where you can drive an RV and trailer inside it and still have room for lots of cars!

The two hour crossing was grey and windy but still fun.  After getting to our little campground ( which was quite lovely)  in the middle of the Island we headed out to see the Bridal Veil Falls and do a little hike.  The falls were anti climatic but the walk was nice and the little town was interesting.  There even was a quilted car!  OK, a car covered in quilts as there was a quilt festival just finishing.  We then decided to go to Gore Bay for dinner and found a nice little restaurant at the marina

called Bouy’s Restaurant.  It was an amazing dinner, great service, since Wanda has some severe allergies they were very cautious and the food was fabulous.  For dessert I had a pie-caken made with bumble berry pie baked into a cheesecake.  MMMMMMMM!  We finished the loop around the inside of the island in time to head down to our lake for a gorgeous sunset!  When we went to bed we set our alarm clock for 4 AM to see if the Northern Lights were going to make an appearance!  We got up, the lights did not 🙁 So back to bed for a couple hours before we headed to

Sault St Marie.  The drive off the island over the very short swing bridge and along the North Channel is a beautiful drive and about half an hour outside of the Sault I pulled off to the side of the road to see if June and Wanda wanted to change vehicles.  So, June drove the RV the rest of the way to the campground with Wanda as a co-pilot and Charles and I followed in the car behind.  This evening was supposed to be another high chance of seeing the Aurora so after a homemade perch fish fry for dinner we headed north of the city after sunset to see if we could see any Northern Lights.  Once again none came so we turned it into a star gazing and night photo shoot.  Our first full day in the Sault was a sight seeing day of exploring the old locks and walking some trails along the rapids.  A visit to the Bush Plane Museum and a stop at Northern Brewery for some beer tasting.  Here we had great service and a good suggestion for dinner so we went to a Southern Barbeque Restaurant that was Wanda friendly and the food was given a thumbs up by the Texan in our group. 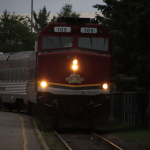 Now for  the main event, the Agawa Canyon Train ride.  This is a ride that is very busy during Fall colours but since we were travelling with teachers and the summer time is a better time for them to travel we went now.  It was a beautiful train ride into the canyon even in the lush green of summer.  The train was a little old and tired looking but since it was not very crowded we had lots of room to find a non busy space and we settled in for the journey.  Once we arrived at the Canyon we had 90 minutes to walk to the Bridal Veil Falls and then the Beaver Falls before climbing up the 300 plus steps to the lookout.  We left the lookout to the end and we were told to hurry.  Apparently we move faster then the normal train rider and we made it up and down in plenty of time.  The train ride home was nice but was about an hour too long as we were all getting very ready to get off the train.  It was a very nice day and we are so glad we could share it with Wanda and Charles.  We found a nice Indian Restaurant in downtown Sault St Marie for dinner that night before heading home.

Pictures from the day’s adventure: 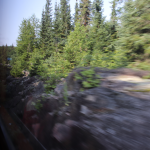 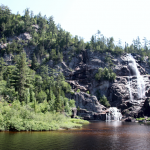 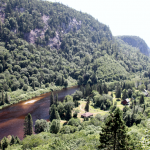 The next day was a little more relaxed.  We meet Homeless James and Mukwah (you can find them on Facebook) and then a trip to the Totem Pole so Wanda could get some good deerhide moccasins and then we went to see Virginia, Ron and Rocky who we had the pleasure of meeting and becoming friends with in Mississippi.  We had a lovely afternoon with them sitting out on their deck visiting.  One last evening together, a barbequed burger feast and then a walk on the trails by the campground that was capped off  by some water falls, well, actually water running over some big rocks, but a perfect way to end the day.

The next morning came to quickly and we could not believe a week of sharing our RV with them had come and gone by so fast.  We had  a teary hug goodbye and then they headed to Ottawa to continue their trip, and we headed north out of the Sault on the Trans Canada Highway!