Back to the ocean we go, with an overnight stop in Dublin, Georgia. Here we had a RV site booked just off the interstate for one night, which was perfect!  When we arrived at the park we soon realized that it was not the “premier resort” that the website stated.  It actually was a little scary!  So, after calling around to see if we could find another park we decided to drive to one close by and, if they did not have room for us we would stay at a truck stop.  It turned out they had one spot left in their small park so we stopped for the night.  Other then a few confederate flags and our pro-Trump neighbour, it was a perfect spot!

Our final destination for the week was the Hilton Head RV Resort and Marina for our stay on Hilton Head Island.  It was a beautiful RV park and we had the perfect corner lot.  It was quiet and filled with lots of wonderful dogs! There was also an exercise room and a 5-star restaurant on site. The only issue was that it was a bit of a challenge for us to cycle.  There are lots of bike paths around the island except where our park was located.  To get to the bike path we had a 2.5 km stretch on a 4 lane highway where the drivers were insane!  So, we only cycled once. 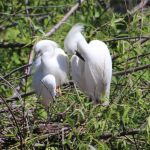 We explored the island on our motorcycles, and walked the beach, once we found it.  There was a National Wildlife Refuge just 4 km away that was a very cool spot.  It was our last chance to see the Painted Bunting that we started looking for in Texas.  We heard him but did not see him!  We did however, see hundreds of nesting Ibis’s and herons as well as alligators that ranged in size from three meters down to one meter babies.

One of our excursions was driving over to Savannah, Georgia. We parked on the other side of the river and took a free water taxi over to the city, so fun! It is a beautiful old town with many little “squares” throughout to wander through or sit and enjoy the cool shade. After enjoying a very tasty lunch and a nice stroll, we headed home.

After a week on the island we headed to the mountains.  The Blue Ridge Mountains of North Carolina were calling us, as well as a cool little RV park called Mama Gertie’s Hideaway Campground. This park was nestled near the top of the Swannanoa Mountain of the Blue Ridge Mountains, just outside of Asheville.  The road up to the campground made Juergen chug, and then the road up to the mountain top within the campground was even steeper. The site is one of the coolest that we have been in.  One of the things that we look for are other people from Ontario for the fun of it.  This time we met Liveo and Janet from Dorchester and Liveo works in Woodstock!  They came up in the evening and we shared a bottle of wine while sitting on our patio and chatted.

Then the rain came!  It rained for the next 30 hours.  So, this beautiful site high in the mountains gave us a nice view of the rain and clouds sweeping the valley.  It also gave us time to work on our blog!!

So, with a slight chance of rain for Wednesday afternoon again (which is our last day here in the mountains) we decided to call Enterprise Rent a Car and get a vehicle for a day.  This allowed us to go over to the other side of the mountain range to Chimney Rock State Park.  Also, on the east side, the sun was shining!  We spent a few hours hiking.  They were not long hikes but there were LOTS of steps.  The first trail we did took us over Hickory Nut Falls.  This is a 123 meter waterfall and with all the rain the last few days it was about 3 times the size it normally is.  We then walked back, and then up to, and around Chimney Rock.

It was not exactly what we expected as far as hiking but there were some stunning vistas.  We had heard so many wonderful things about Asheville, we decided to head there.  Just outside Chimney Rock on our way out, a

tree and hydro line were down across the road so we could not get through.  Everyone was turning around so we followed them and walked around the shops for a bit before settling on the patio of Hickory Nut Gorge Brewery. A beautiful spot along the Broad River.  After a couple hours of sipping beer and soaking in some sunshine, the road crews had the road open so it was time to head back to our side of the mountain and to the rain again!

Our time was too short (due to the weather) here in the Asheville area so we must come back!